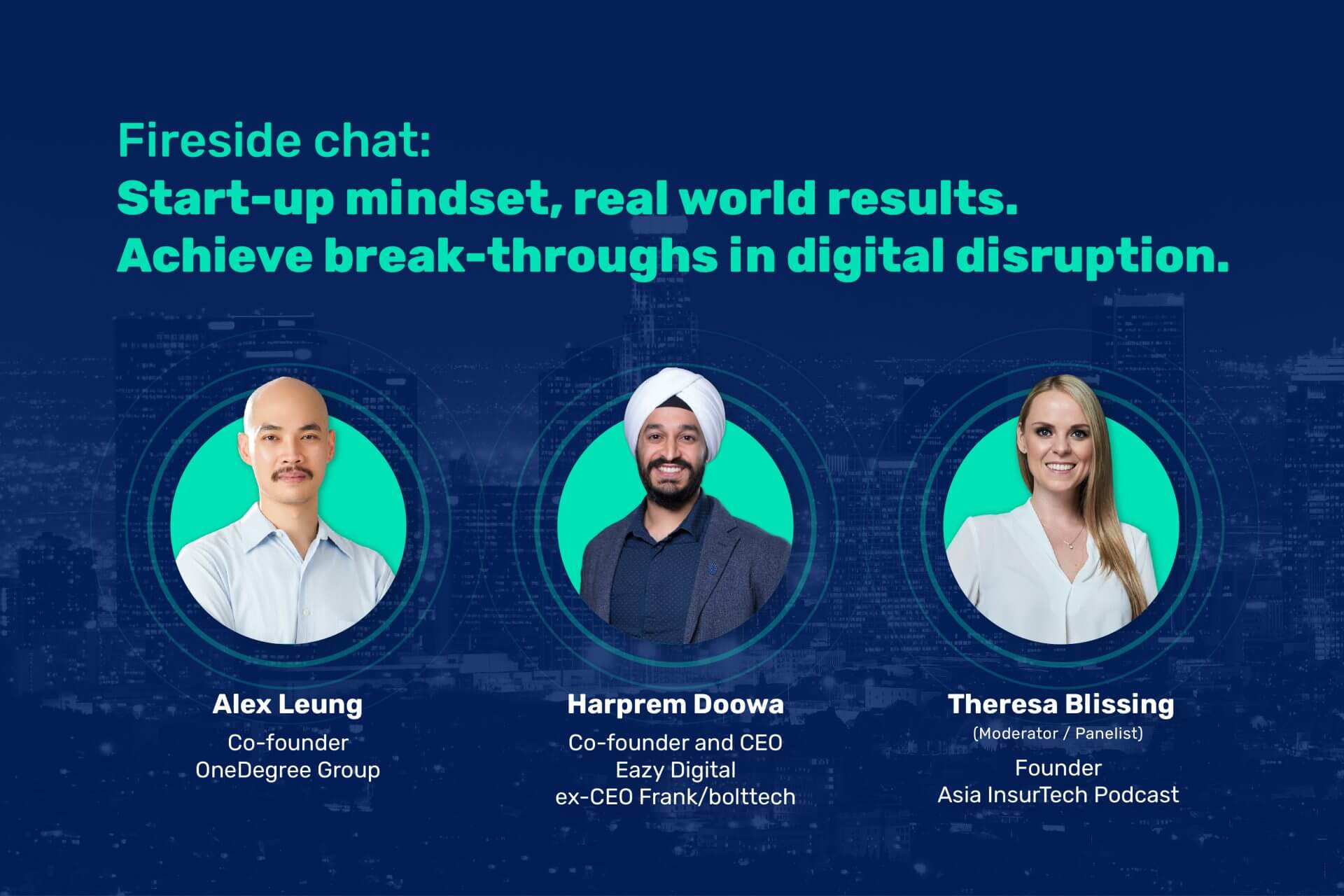 In this fireside chat, Harprem Doowa, co-founder and CEO of Eazy Digital, Alex Leung, co-founder of OneDegree Group, and Theresa Blissing, founder of Asia InsurTech Podcast, discussed the changing mindsets in the insurance industry and the lessons that incumbents can learn from start-ups.

With insurance being heavily regulated, regulations are usually blamed for being difficult in the industry. But shifting the blame on regulations is a cop-out, considering regulations only change when industries push forward and try to create change.

The real problem in insurance is the “if it’s not broken, don’t fix it” mindset among incumbents. One should fix it before it gets broken because, once it’s broken, it’s already too late.

Insurance companies have been using their existing business models for years without change and are accustomed to working that way. They build processes and systems around such established models. But when these models become ingrained into the mindset and culture, it becomes difficult for insurers to get out of that loop. Even when they want to drive change, their processes and teams continue to be stuck in that loop. Trying to get themselves out of this closed-loop mindset is a challenge.

Most insurance leaders continue to face status quo bias within organizations. Often organizations know they need to change but settling problems as they pop up without understanding the causes is like a game of whack-a-mole. There are also not enough people willing to rock the boat, invest, or work hard to change the norm. And subsequently, when there is a lack of fundamental change, either due to misaligned interest or lack of incentive, nothing will change.

So, the industry reverts back to its status quo because it is a comfortable space, a safety net. This makes innovation or transformation initiatives more difficult because when there’s a setback, the people in charge decide to turn back and go home. Similarly, when it comes to decision-making, there’s a lack of individual accountability by having to gain consensus from others.

As a result, we hear about the innovation theaters at insurers with new initiatives and reorgs that happen all the time, keeping them busy, but don’t solve the barriers to innovation.

Having a Start-Up Mindset

In traditional corporates, if a process or journey is complete, it is usually left stagnant without constant iterations or improvements. There are no sprints for regular improvements, updates, and integrations. Corporates do a one-time build, tick the project off as complete, keep running the same build for some time, and see how long they can go before doing a massive upgrade later.

But in contrast, a start-up mindset is the willingness to challenge norms, break the system to enhance it, or at least dissect it to see how it works and continuously improve. It’s highly driven top-down. So, if your employees see the company leader challenging the status quo, they would be inspired to do the same.

While it can be argued that a corporate mindset is required to scale because it reduces risks, standardizes processes, and increases the overall investor value, there are also companies like Google being able to scale while maintaining a start-up mindset.

Let’s not forget that every large organization was once a start-up willing to take risks with new ideas, methods, business models, etc., while having the ability to be agile and maintain a culture of experimentation. They just need to find that spirit back.

There are a lot of talented individuals working at large corporates or organizations. But often, the responsibilities, scope, or culture restrict what these individuals can perform. To ensure that the environment feels safe for employees to speak up and take responsibility as well as accountability for any shortcomings or missteps, an organization can:

As an organization grows, it’d start to prioritize process with employees spending more time documenting stuff rather than creating new things. Though these processes reduce risk to the overall organization, each layer of the process reduces the ability to be agile and respond to new opportunities.

This is why it’s important to balance processes and agility in an organization.

For example, Amazon has highly streamlined processes. But at the same time, the company has a customer-centric mindset. So, while it is process-driven, its focus is on constant change in the processes rather than the process itself.

Bottom line: There’s nothing wrong with standardizing processes if you’re willing to challenge the things you set up in the past. That is true innovation.

Also, companies should not simply copy the so-called best practices without considering their own context and competencies. It can be counterproductive and slow them down. Instead, they should focus on being agile in understanding their organization’s key competencies, where they are going, and look at the best path forward to advance to the next stage.

Insurance companies are still far away from Web3. Most of them are still getting around Web2, such as trying to build a proper transactional website or app to collect data accurately and provide customers with a customized experience in terms of product offerings and purchasing journey.

However, insurance in Web3 will be the next big thing that helps unlock more businesses, enables users to own digital assets, and enter the DeFi world. Modern insurers like OneDegree are already underwriting insurance policy cover for private key loss. Currently in the market, there are also community-based DeFi protocols to cover smart contract risks, and NFT insurance that extends coverage to the physical property like paintings, collectibles, etc.

Hence, there’s a lot of creativity and extension that can happen with Web3 as new risks emerge. As of now, the industry has barely scratched the surface.

Accelerators and incubators in insurance often fail and don’t produce meaningful results because they are treated as side projects. Not enough resources are invested to succeed. Accelerators have become a way for insurers to understand the market and gather information. Besides, these accelerators also don’t make decisions and heavily depend on the business users.

In order to be successful, there are a few things to consider: